Editor’s note:
This is a reprint of an article in a series called “Tellers of Weird Tales” by Terence Hanley. Original article is here. What an exciting find this was! I had been in the habit of searching for lists of his works, and happened upon this story of Robert J. Black Jr.

Tellers of Weird Tales
Artists & Writers in The Unique Magazine

by Terence E. Hanley, Author of Tellers of Weird Tales 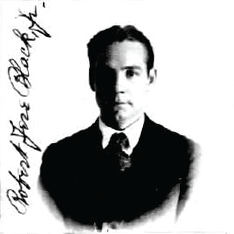 Robert Jere Black, Jr., was born on June 27, 1892, in McKeesport, Pennsylvania. Son of a physician, he turned to the arts for his living, writing stories and other pieces for slicks and pulps, including The Smart Set, Life, The Saturday Evening Post, Breezy Stories, Battle Stories, Sweetheart Stories, and College Life. His work for Weird Tales consisted of three poems published in 1928 and 1930. Black also wrote a non-fiction piece, “The Pseudo-Scientific Field,” for Author and Journalist, published in May 1930. Science fiction fans are interested in Black’s essay for its early look at their field, so early in fact that the term “science fiction” wasn’t even in common usage yet. His work also came out in hardback in the 1934 novel, The Killing of the Golden Goose: A Christopher King Mystery Story.

During World War I, Black served with the American Expeditionary Force in France from May 1918 to May 1919. A machine gunner, he was gassed by the Germans and suffered from ill health throughout his life. He returned to Europe in 1923 hoping to recuperate. In and out of the hospital, he continued to write, although I haven’t found anything else by him from after 1934.

In addition to McKeesport, Black lived in Chautauqua, New York; Washington, D.C.; Long Beach and Santa Monica, California; and Byron Center, Michigan. His life ended far from home though, in the home of Pablo Heuer, in Ajijic, Jalisco, Mexico. Ajijic, located on the shores of Lake Chapala, had been a magnet for writers, artists, and entertainers since the 1920s. D.H. Lawrence, David Herbert, Somerset Maugham, Tennessee Williams (another teller of weird tales), and the writing duo known as Dane Chandos all lived there at one time or another. Elizabeth Taylor, Charles Bronson, and other Hollywood stars were drawn to the area in later years. In any case, Robert Jere Black, Jr., described by his brother as “a brilliant, fascinating person,” died in that writer’s haven on September 7, 1953, after thirty-five years a casualty of World War I. His body was interred at the Ajijic Municipal Cemetery the next day.

Black’s wife, known as E. Best Black, was also a writer of genre fiction. Born Josephine Elizabeth Best in 1894 in Meadville, Pennsylvania, she was the daughter of Dean Wesley B. Best of Allegheny College. Josephine and Jere Black married in 1920 in her home town and traveled widely after that. She wrote two hardback novels, The Ravenelle Riddle (1933) and The Crime of the Chromium Bowl (1937). Her detective was named Peter Strangley. She also wrote a story with the punning title of “Flaming Ruth” for Young’s Realistic Stories Magazine for February 1928. She later remarried, her new husband being named Theron Lowden Kelley (1899-1967). Josephine Elizabeth Best Black Kelley died in 1976.

Further Reading
Black’s essay, “The Pseudo-Scientific Field,” was reprinted in the magazine Blood and Thunder #11 in the summer issue 2005.

Thanks to Randal Everts for information on Black’s life and death and on his wife’s life and career.
Text and captions copyright 2011 Terence E. Hanley